The 3 types of men

This poem separates the stanzas

to separate the different kinds of men.

Now this is gonna sound like a poem for the ladies,

but it’s really just a note for the boys

because fella’s, the snakes are in the grass

and we want to know where you stand.

Out where the blades weave over our feet

and all out toes become blind fingers.

Where do you stand?

This is where a feeling of retribution

has us mixing up our words,

a desire to help has us twisting definitions.

A safe space is becoming synonymous with like-minded opinion,

and the word ‘Trigger’

is being used as a warning for foul language

and we still don’t know what to do.

because this is a world

where the doctors are the last to know

and on our own,

we’ve each let an olive branch die in our hands.

and courageous as the most honest of expressions.

So this is now a poem for those snakes in the grass,

stealing their words from the actions they insinuate

and the stories that they fabricate

and we need to face the fact that we’re already friends on facebook.

just because women can do this alone,

doesn’t mean we need to leave them alone to do it.

We need to thin the herd,

we need to take a step back and view each other like the cat in Schroedinger’s box,

until that box is opened

and we all become seen for the things we’ve eaten,

because if we ignore this much longer

that box will just be filled with the dead kittens nobody wanted anymore.

there is a light side and a dark side to the force,

so these either are… or,

these aren’t the droid’s you’re looking for.

We cant ignore that our wool is no longer made for warmth,

but rather something to be pulled over the eyes of the unsuspecting,

mine, your and what really happened,

there are 3 types of men.

And some of us want to show the world

that we represent more than just physical strength

because the strength you have is fleeting,

falling through the fingers you think you can actually feel something with,

you’re the type that still goes to the length

that suffocates the people you hold down,

so to that one type;

You’re the reason we’re not trusted

and it makes me feel a little violent

because you’re using us

to get to them

and if that makes us the middle men

then our type will move at once

and stop you from hiding in our shadows

until your hands followed up on your eyes expectations.

so what you need to do is hop a train and run for you fucking life.

But even though we get heated

and our instant reply

while we jump to her side

is to be supportively LOUD!

And express our desire to HIT SOMETHING!!

a trigger is something that might force back a memory into someone else’s mind,

but then there’s body language

something as simple as reaching for a cup too quickly,

of a shared walking path late at night.

So this is a poem to separate the men from the boys,

because our eyes are open,

we will find you out for what you really are

and we wont have to give you a trigger warning

so we will only tell you this…

You are no longer welcome

Your pencils are too phallic

and there are those of us

who want to staple you to the wall with every pen you’ve ever touched.

because you’ve put us in a position

where we can only face our sisters

by turning our backs on you,

well I’m looking at her now

and together we have more than just strength,

collectively we have the power over memory

a power you couldn’t imagine,

to make sure that you’re forgotten.

We can delete every lie you’ve ever recorded

and whatever’s left will be loaded

with comments and links to who you really are

and only your reputation will be attached to your name

and the cringe that shivers down her spine

will become the only thought that follows the image of your face.

even your greatest poems will become nothing more

than the words you’ve stolen

because the locks on our doors have no idea

if you’ve got a key, or if they’ve been picked,

but we know you’re in the room

and most of us are guilty

thinking ‘That’s not so bad’, or ‘That’s kinda funny’.

and ended the thread of that thought

like scissors were more than a couple of one-sided blades.

we allow ourselves to feel busier than we really are,

so quickly rubbing our days together

just to make it through the week,

so to every last one of us

Only half listening just to keep the boat from rocking,

but there are some things

being late for cant be apologized for,

We’re sorry it took a website and the size of a spokeswoman’s name,

but for what it’s worth

a lot of us would like to join you,

a lot of us feel as though we already have

and a lot of us would like to know for sure

who the some of us really are,

show you that the some of us

are not the sum of who we are.

But we cant help stop something

if we cant see the individuals,

to put a face to the name

So from this moment on, every sing-up list I organize

will keep an empty space where your poems used to be

and not a single name will be called.

We will remember you for what you really are,

the patriarchy that hides in art,

like the bruise in the fruit that begins from the inside,

why women bleed in the wrong way,

the reason our history is told in riddles,

the reason we had slave ships

and heard English off the lips of children lost in a residential school.

We’re turning our backs on you,

so our faces can finally face a freedom

where the merger of patriarchy and ideology

will one day have too many broken fingers

to even attempt to remould the forms of who we choose to be. 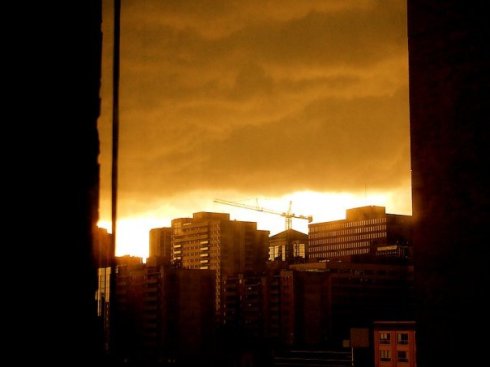 where the conversations are drawn by cowards who will never face you.

These are the fights

that spare our knuckles,

our noses, chins and eye sockets,

these are the ones that happen behind our backs,

softly lingering only long enough to make a judgement

and leaving before someone else can leave a reply.